Joy Wisken plays an integral role within TaylorMade Golf Europe as she’s the person you’ll first see or hear when you contact the European Headquarters. Being the first point of contact, she sets the tone throughout the business, managing the reception, answering the telephone, welcoming staff and our esteemed visitors to name a few.

“When I joined TaylorMade, it was called Salomon TaylorMade Adidas Golf, and it really was a sink or swim moment for me. There’s nothing like learning on the job, and to this day, I remember being thrown into the deep end having to answer the phones, meet and greet on my own during my first day.”
- Joy Wisken

Being able to think fast, solve complications and ensuring that clients and customers feel that they are in good hands is Joy’s forte. Her flexibility and ability to adapt to new situations were influenced by over 30 years in the hotel and catering sector, where she became one of the youngest catering managers at the age of 21.

“I started off as a Trainee Cook at the Central Fire Station in Birmingham and fell in love with cooking. I worked my way up and started my own catering company with my family running high-end functions. I was headhunted by TFC Frozen Foods and within a short space of time I attended the Hotel Olympia Catering Exhibition, launching my own ‘Landlords Choice’ multi-portion dishes.”

A strength of Joy’s has always been the ability to multitask, finding comfort in high octane situations, and prior to her role at TaylorMade she owned and managed multiple businesses. Throughout her career, she admits that becoming the landlady of Ye Olde Kings Head in Chigwell was a standout moment due to the history of the establishment and the memories she made with her family. “It was the place to be at that time, many regulars now recognised as household names, whilst also being able to run high-end functions on the side, I was in my element! At the time, I had a young family, and we made the decision to move to Hampshire for a quieter lifestyle which is how I started my TaylorMade journey.”

If you’re knowledgeable about the local area of Chigwell, Essex, you might now know of the Ye Olde Kings Head to be Sheesh Restaurant.

With all the success in the catering industry, Joy’s desire to have a quieter lifestyle brought her to TaylorMade, and she’s never looked back. “Growing up, I’ve always been sporty, I played netball at school, and my dad was on the books at Manchester United. Spending so much of my younger life around football, deep down I knew I’d end up doing something related to sport.”

“TaylorMade has evolved so much throughout the years. As every day is so different, it keeps me wanting to do more,” she says. “When I first started, I was answering the phones, and it never stopped. I don’t think I exaggerate when I say we answered about 1000 calls a day. I've always been interested in so many different things and followed opportunity as they come up , and that’s why my role has adapted throughout the years”.

Joy’s high awareness of the activity throughout TaylorMade makes her best suited for this job, her responsibilities go beyond managing reception looking after the needs of many departments within the company. What’s Joy’s secret to securing “the best job in the world”? “Working hard, being a team member, and not being afraid to ask questions.” 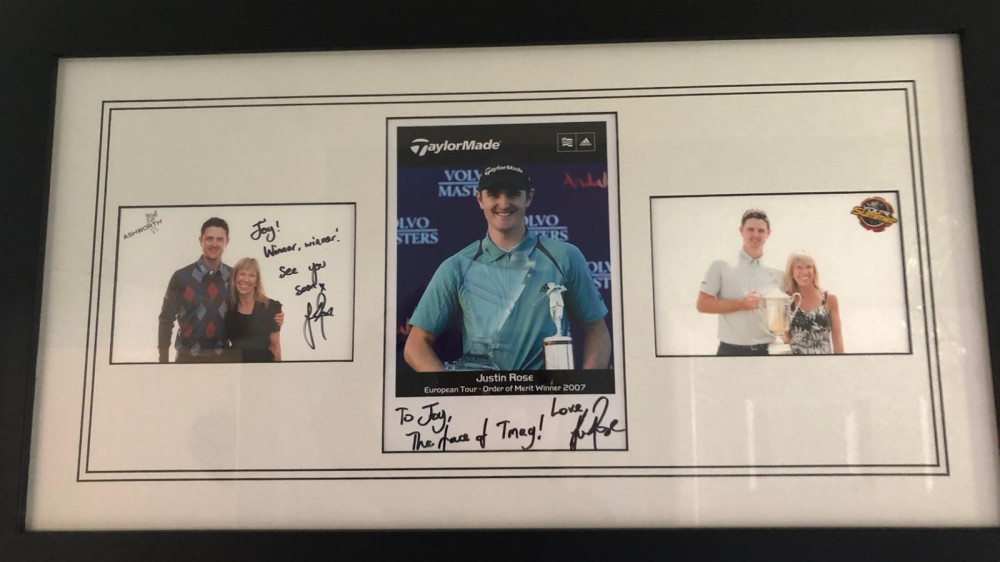 When asked about her standout moment, “Getting to know Justin Rose throughout the years was a special moment for me. I have known him for 16 years, and being able to follow his journey has been amazing. He was very approachable and used to visit the office on a regular basis. He called me the face of TaylorMade, and I’ve adopted that title!” she reminisces

Working for a Golf company, the perception is that you must play golf, which isn’t always the case. As a late starter to the sport, Joy is now a regular at Basingstoke Golf Club and walks the fairways with the other members on a Saturday morning.

“A few years ago, I started to have lessons and really enjoyed it. I obtained a membership and headed to the course every Saturday, I met a couple of people, and one thing led to another. I now have a group that I play with on a regular basis.”

Like most, the pandemic put a stop to Joy’s Saturday morning fourball, but her determination to get out as much as possible brought her handicap down from 45 to 37. Favouring warmer playing conditions, Joy’s planning her next outing on the fairways in sunnier climates.