The Proper Response | Which Model of Tour Response Golf Ball is the Best Fit for Your Game?

The Tour Response family is built on a single principle: Tour quality performance, for less money. The marquee feature is a cast urethane cover – the same golf ball material used by every touring pro on the planet. It’s designed to give you a premium feel and better spin around the greens. That’s the “Tour quality” part. The “less money” piece, well, that’s pretty self-explanatory. If you could save a few bucks and a few strokes simultaneously, what golfer wouldn’t take that deal?

The revamped Tour Response lineup features three different options. The core model, Tour Response Yellow for high visibility, and the all-new Tour Response Stripe with an advanced visual tech called 360° ClearPath Alignment to help you better aim your putts. Before we break down which model is the best choice for your game, let’s look at what would make Tour Response the right ball for you.

Broadly speaking, this is a golf ball best suited for amateur players with moderate to fast swing speeds. If you’re someone who could maybe play a Tour ball (TP5/TP5x), but you prefer a softer feel with maintained control and, let’s face it, don’t want to fork out the big bucks, then Tour Response is for you. 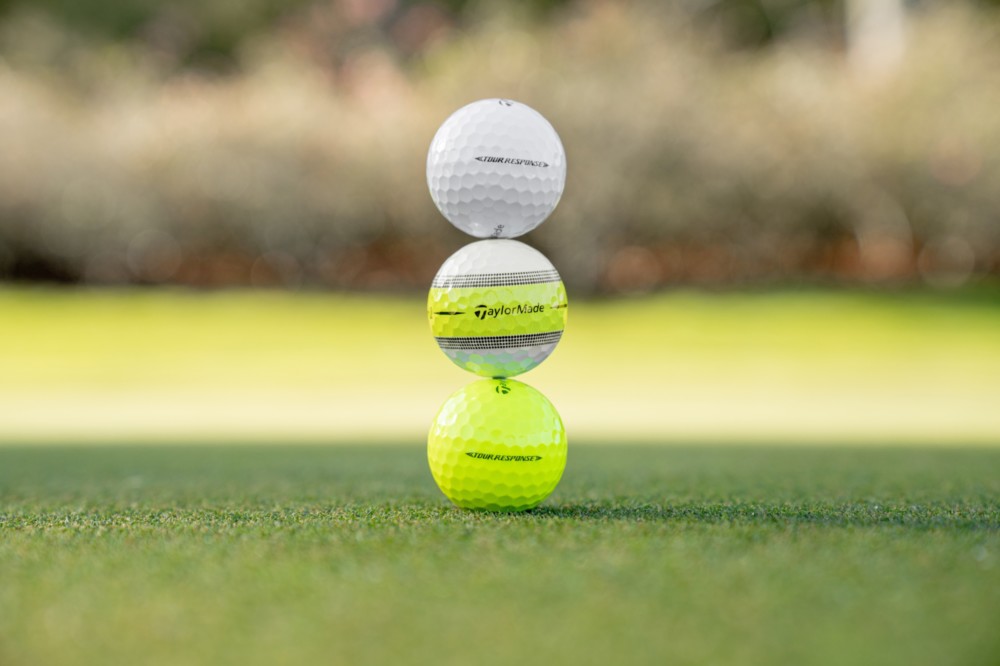 When it comes to judging performance and ball testing, there’s no better guide than the golf course. An excellent place to start is with your mid irons. If the pace of play allows, grab two different clubs and hit them both from the same distance. For example, hit a soft 7-iron and a hard 8-iron into the same pin. Judge the carry distance, the feel and see how the ball comes into the green. This exercise provides a good barometer for how the ball will perform on the different shots you’ll need around the golf course.

Then head to the green and put yourself in various short game situations. See the reaction of the ball as you try to hit different shots. For instance, the flop, the low checker, your standard pitch, and a little chip & run. Gauge each of these and determine whether the ball meets your standards. For a more in-depth look at how to test a golf ball, check out this video with our very Chris Trott.

Now that you have a pretty good feel for whether Tour Response is the ball for you, let’s look at each separate model and determine the proper response.

This is genuinely a Tour-level ball built for the non-Tour player. If that sounds like you, someone who wants tech and performance engineered for your game, Tour Response should be the ball of choice.

Tour Response Yellow has all the tech of the standard model but with an enriched yellow urethane cover. What does that mean? This isn’t simply a golf ball that’s painted yellow. Our engineers took the extra step to create a yellow urethane material, so there’ll be no paint chips on your ball at the end of the round.

If you already play a yellow ball, then you know durability can be an issue. You want it to be as bright on the 18th green as it was on the first tee (that’s hoping for the rare feat of playing the same ball the whole round). If you like yellow, and the tech, performance, and price of Tour Response sound appealing to you, look no further.

Over the years, the Sharpie has been a close friend of golfers wanting to make more putts. At every level of the game, from the Tour on down, we’ve seen golfers marking their balls for better alignment. We’ve taken that concept and made it easier by marking your ball for you with advanced visual tech called 360° ClearPath Alignment. It’s a 22-millimeter digital band that wraps around the center of the golf ball to help aim putts better, faster and more consistently. Inside the band is a thin black line to match with putter sightlines for immediate aid in alignment.

If you want to give your Sharpie a rest and look for a more consistent alignment aid, give Tour Response Stripe a try.