To deal with the demand of Tommy’s schedule, pre-season testing is the perfect time to not only test product, but for Tommy to dial in his equipment. The meticulous plans of pre-season logistics are forever changing, but as of 2022, TaylorMade’s DP World Tour Pre-Season testing has a new home. Located at TaylorMade’s Fitting Centre in Dubai our Tour team now have a base to dial in the worlds best ahead of the middle east swing.

Known among TaylorMade Tour staff as a very detailed player, Tommy was one of the first members of Team TaylorMade to hit and give feedback on the all-new Stealth driver. Before we get into the details of Dubai, let’s take you back a step to our annual TaylorMade Photoshoot where Tommy met up with Senior Tour Representative, Adrian Rietveld.

“At this level of the game, particularly with Tommy who is so detailed with his equipment, players are only going to switch if they know it can improve their performance on the course. There’s no change for the sake of change.”
- ADRIAN RIETVELD, TAYLORMADE SENIOR TOUR REP 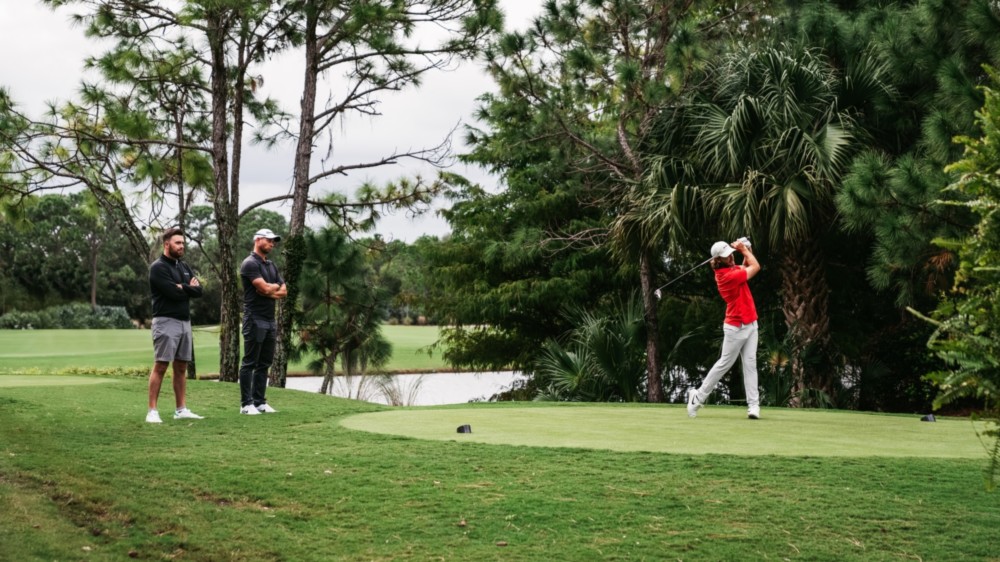 “It all started the moment Tommy finished at the DP World Championship. On the Sunday he flew straight to Florida and was on the range at 11am ready to start testing. Tommy takes this part of his game very seriously and we knew that the work we were going to be doing over the next 4 days was crucial.”
- ADRIAN RIETVELD, TAYLORMADE SENIOR TOUR REP

Shot after shot, the Trackman and Quad numbers were impressive. Tommy felt comfortable with the Carbonwood options on the range, but ultimately the true test was out how they performed out on the course. “Tommy will put equipment in play immediately when he feels he’s giving up performance without it, so during the fitting it was about finding driver options. We had a full fitting session on Tuesday and by Wednesday we were close. On Thursday (Thanksgiving) we headed out onto the course, now picture this, there wasn’t a soul on the course, full reign of the Tour Truck and we went into full 2022 mode!” 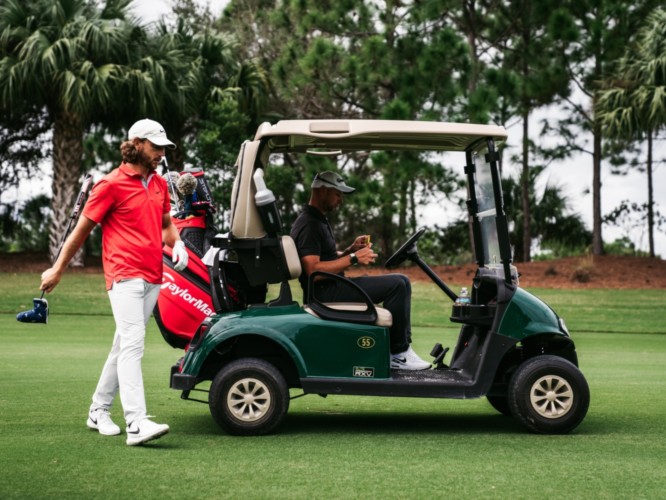 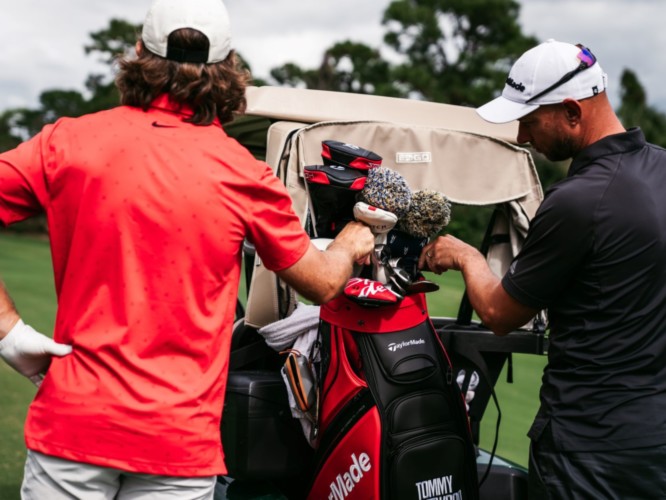 Walking out with 2 Stealth Drivers, 2 3-woods and a 5-wood, Tommy was hitting all types of shots to understand the playability of the new equipment. “I wouldn’t tell him which driver he was hitting, they were setup slightly different. One was an 8 degree head set on the standard setting and the other was a 9 degree set at the same loft and we were toying with 2 different face angles and both were very good. That’s the thing that we noticed early on with the driver. The off centre hits were fast and amazing on dispersion. The off centre hits were spinning good, high on ball speed and we took it on the course, he would put the drivers down and hitting loads of tee shots, 13/ 14 holes and use the clubs in playing conditions and grind through it all.”

Not only was Tommy putting Stealth driver through its paces, he was also testing an 60 degree LB MG3 Wedge, speaking to Adrian on this he said “We gave the wedge to him on the Monday of the Photoshoot and Thursday afternoon it looked 3 months old.” 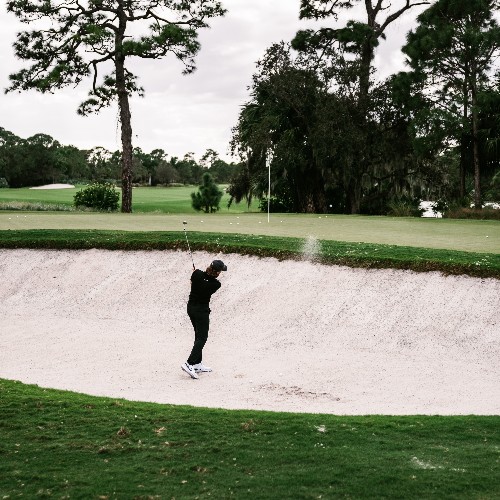 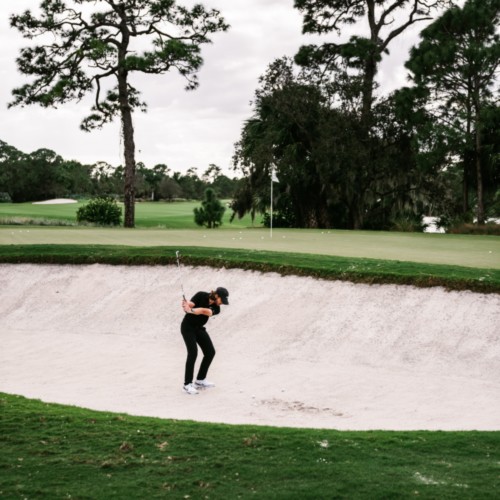 Fast forward to January 2022, and as the sun shines down on the range, Tommy’s putting on a driver clinic. Going through a full bag check, Tommy didn’t hit one bad shot. Along with Adrian and Fino, Tommy went through his yardages after the Tour team checked all loft/ lies and regripped his clubs. 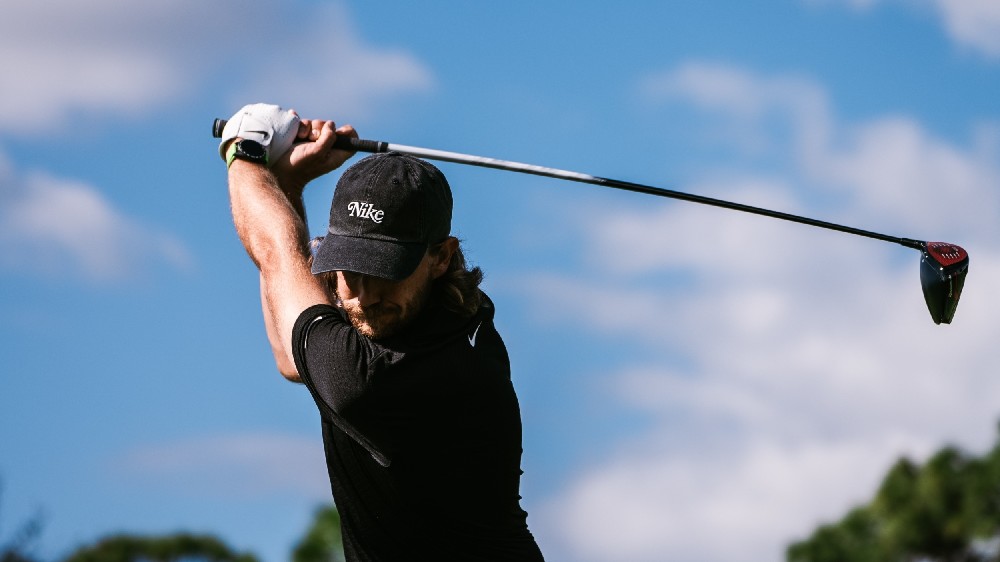 In terms of his specifications, there hasn’t been a shaft change this year. Speaking to Adrian on this he said, “ Normally when you don’t change a shaft you’re not searching for anything. It’s a variable that if you can keep it the same, you can fit the head of the golf club and prove the Carbonwood technology. He’s in the same length, same swing weight and same loft. His spin rate dispersion went from 500-600rpm from highest spin rate to lowest to probably 300rpm’s. I’m so excited about the 3-wood we found him. Stealth Titanium rocket 3-wood, it was a great find!”

“From the work that we did in Florida, we haven’t changed a club yet. We built a 5-wood as he felt it was performing slightly differently in Dubai than in Florida, but walking the course with him this week, we played until it went dark and he was impressive, his speed was up and drove it great.”